XCOM's best modders have made a mind-boggling grand strategy game

XCOM's best modders have made a mind-boggling grand strategy game

It didn't take long for me to realize Terra Invicta was going to be something special. A standalone game from the creators of XCOM and XCOM 2's ambitious Long War mods, Pavonis Interactive has basically taken the strategic layer from XCOM and turned it into a Paradox-style grand strategy game. The scope is just mind-boggling from the get go, and it never really stops feeling that way. Every major nation on Earth in 2022 is simulated alongside the entire solar system—out to asteroids and ice dwarfs beyond the orbit of Pluto. Describing it sounds almost ridiculous until you see it for yourself. And somehow, it also actually works.

The start date is right about now, with everything down to the Russia-Ukraine conflict and membership in transnational alliances like the EU and NATO modeled in detail. Countries have all sorts of ratings that affect how they behave, from military technology level to political freedom to wealth inequality, which can each be nudged in either direction if you gain control of their foreign policy. The big difference is that an alien spaceship has crash landed somewhere on Earth, and no one agrees on what to do about it.
Unlike most grand strategy games, though, you're not playing as a nation in Terra Invicta. Rather, you take control of one of several factions with a specific idea about how to handle the discovery of intelligent, alien life. The Resistance is the default faction, and they're like your typical XCOM or Stargate Command—their main goal is to defend Earth from alien attacks and secure humanity's independence among the stars. The Protectorate, on the other hand, wishes to submit to the aliens as a vassal state, seeing a prolonged war as a doomed affair. Project Exodus figures the neighborhood is getting a bit crowded, and they only care about building a colony ship that will allow us to secure our species' future somewhere very far away.

There is a fairly sharp contrast, at least early on, between the absurd depth of the simulation and the relatively simple ways you can interact with it. Yes, it will track atmospheric CO2 on Earth to model global climate change, rising sea levels, and the resulting economic devastation, which hits some regions harder than others. Yes, there are multiple Lagrange points around the moons of Saturn where you could place a space station. But for the first year or so, this is essentially a spy game.

Your faction is led by a council of up to eight characters who all have different missions available to them and are good at certain things. A celebrity might excel at swaying public opinion toward your faction, while a spy is good at undermining other factions' agents. Their main job is to convert Earth's nations to your faction's ideology, which is the only way to secure more resources early on and can eventually give you control of their militaries and space programs, if they have either. This is done by targeting Control Points. Larger nations like the US and China have access to far more resources, but they also have more Control Points, all of which are much more difficult to capture.

Once you secure all of a nation's Control Points, you get to set their economic priorities and foreign policies. You could treat this like a futuristic Hearts of Iron if you wanted, and try to solidify support for your faction by conquering the world with conventional military operations. Just be aware that if you attack a country or alliance that has nukes, you may be making the aliens' job easier for them. That global temperature modeling can go the other direction, too, and a nuclear winter that kills off half the population is another possible way this can all end. 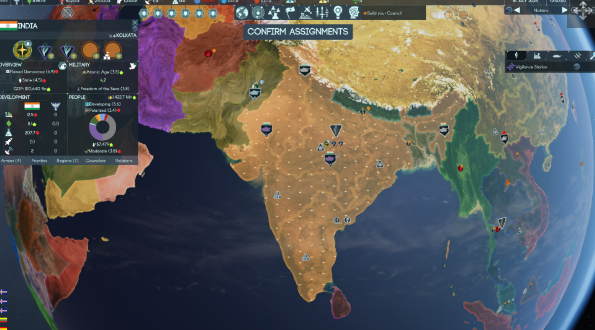