Bugs Bunny gets what he deserves in this new MultiVersus trailer

Bugs Bunny gets what he deserves in this new MultiVersus trailer

Nobody really said it better than Twitter user DJMCTV who wrote that the latest MultiVersus trailer was "like mixing cereal." The Smash Bros.-style brawler dumps a bunch of iconic Warner Bros. characters like Batman, Bugs Bunny, and (Ultra Instinct) Shaggy into the same bowl and slides it over to you. In the trailer, we get to see some new additions to the cast, as well as a look into how MultiVersus will try to reconcile their vastly different backgrounds into one, cohesive game.

Trying to describe this trailer is like trying to describe what goes on in Fortnite to anyone born before the new millennium. You have Batman standing next to Shaggy who punches Bugs Bunny square in the face. Arya Stark from Game of Thrones defends the rabbit and then Adventure Time's Jake the Dog shows up. And for the first time, you get to see the game's version of Tasmanian Devil (Taz), Scooby-Doo, and Velma.

MultiVersus is a barrage of cartoon characters (with many of the original voice actors) battling each other for no apparent reason except that it's a good pitch for a free-to-play platform fighter, not unlike the shoddy Nickelodeon All-Stars Brawl game that came before it.

The characters' abilities are primarily designed to synergize in 2v2 matches, but the game will also offer 1v1 and 4-player FFA modes. MultiVersus will be available on PC and include cross-play and cross-progression for consoles. You'll also be able to gather friends and other players into guilds in order to help organize matches. 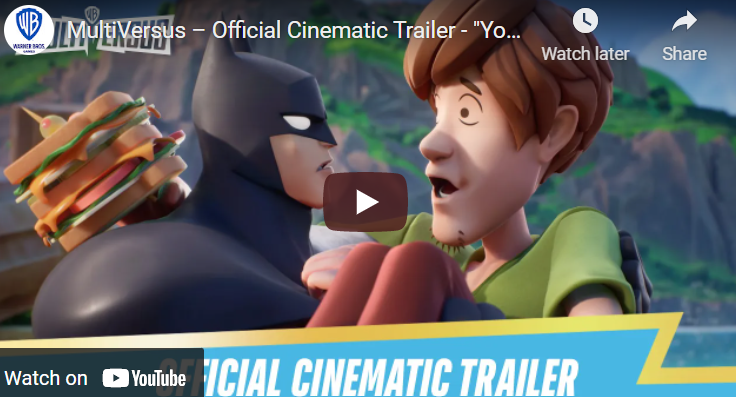